Flora of the Giant Mountains

Plant life is what particularly distinguishes the Giant Mountains from the Sudetes and all the Central European mountain ranges. In a relatively small area we can find species from different geographic regions, many of which are rare and endangered by extinction. The Giant Mountains are also home to post-glacial relics (they have their own isolated posts, detached from the original site) and endemics, which we will not see anywhere else in the world.

Campanula bohemica
Inconspicuous, since reaching only 40 cm, but also a truly “superb” endemit of Karkonosze, which can be distinguish from other “bells” bwith a skilled botanist’s eye. It became the new logo of the Karkonosze National Park, decorating it with its dark blue, inclined flower (in the company of Gentiana asclepiadea and the Śnieżka mountain). Walking around Karkonosze we can meet this beautifu plant mainly in the mountain halls (Szrenica, Złotówka and Polana). Unfortunately its number is declining in Karkonosze, due to the cessation of the traditional pasture-grazing economy. For that is why the Campanula bohemica (along with other rare plant species) have been breed in Jagniątków Livestock Bank.

Primula minima
It blooms in May and June and in spite of its small size, (merely 5 cm in size), it delights human’s eye with pink or purple flowers, which among the rocks and mountain grasses, can hardly go unnoticed.

Thymus alpestris
It is famous for its intense and pleasant smell. Besides the Giant Mountains it is also found in the Carpathians. It has two types of shoots – green stems, which root and inflorescence shoots growing out of them – that end with purple, lip-shaped flowers gathered in a loose head. It is related to the commonly known Garden Thyme, known by the ordinary name of the thyme.

Pedicularis sudetica
At the same time the endemite and glacial relic, occurring in the surroundings of the springs and in the high humidity transitional peatlands of the subalpine floor. This species is a semiparasite, which gets water and mineral salts by penetrating into the roots of other plants.

Galium sudeticum
Critically endangered and rare endemite of the Bohemian Massif, which as a pioneer species occupies rock shelves and fine litter of basalt or granite rocks, creating thick sod.

Allium sibiricum L.
This unusual representative of exactly the same kind like commonly known garlic, or onion, it only resides in Karkonosze and Massif Pliska. In the Karkonosze Mountains you can find it in subalpine floor terraces, among others – in Kocioł Łomniczki.

Allium victorialis L.
Formerly, its range in Karkonosze reached the Kocioł Łomniczki, Kocioł Małego Stawu, Czarny Kocioł sites, along with Śnieżne Kotły and the surroundings of Szrenica. To this day, only one stand has been preserved, with about 200 individuals residing in Mały Śnieżny Kocioł. It is therefore a critically endangered species as far as the Giant Mountains wildlife is concerned. The main cause of the decrease of the species was the environmental pollution in the 70s and 80s.

Micranthes nivalis
This glacial relic - reminiscence of the glacial period, “has chosen” the Giant Mountains as the only place of its existence in Poland, which makes Karkonosze its the southernmost station (not mentioning its natural range in the north). Snow saxifrage prefers shaded shelves and slots in vertical basaltic rock. Unfortunately, the collection of specimens for the herbarium collection purposes - caused that 90% of the population was devastated. It is a species successfully bred in the Living Gene Bank in Jagniątków.

Rubus chamaemorus
We can find this glacial relic in the Giant Mountains only on two sites: the peatland of Úpa on Równia pod Śnieżką and the peat bog at Sokolnik. Although these are undoubtedly water-related habitats, the species feels much better when growing near the most dry parts of the peat bog in the wilderness (if possible. In dryer condition it will bloom with white five-petal flowers and the orange fruit.

Carex magellanica subsp. Irrigua
Although looking like grass, C.magellnica belongs to another group of plants. It is a glacial relic and can be found in Poland only within the Giant Mountains, where peat bogs are located in the subalpine floor. Outside of Poland it it occurs in the north of Europe and in South America.

Veronica alpina L.
This small plant - a relative of other common species of droplets, could once be found near Mały staw, Polana or Śnieżne Kotły, although it is associated only with one place today – Wielki Śnieżny Kocioł. Veronica alpina L. lives in Europe, Asia and North America. In Poland, outside of the Giant Mountains we can also meet this species in the Tatras and Gorce. Like other species it blooms with blue flowers.

Pimpinella saxifraga subsp. Rupestris
This is an endemic subspecies of the pimpinella saxifrage, occurring only in the Giant Mountains in Kocioł Małego Stawu. This valuable plant may not necessarily catch our attention, still it is an extremely rare part of the mountains plantlife. It produces an inflorescence called a baldachin, composed of small, white flowers, like other plants of this family. It is a component of rocky, scree and high mountain grasslands.

Arabis alpine
This representative of the Brassicaceae family occurs in the Giant Mountains only in one place - in Mały Śnieżny Kocioł. Outside of the Giant Mountains is can be also found in other European mountain ranges as long as higher ranges of Polish ones. The whole plant is covered with dense hair, which is an adaptation to the harsh mountainous conditions- and provides the plant with a protection against heat loss and drying out.

Pulsatilla alpine
We cannot deny this “spring lady” a charm she undoubtedly deserves. As far as Poland is concerned - besides Karkonosze it can be also found in Babia Góra, in the Jizera Mountains as well as the Tatra mountains. On top of each blossoming stalk, we can find a magnificent, snow-white flower, which after a blossoming – turns into a fruit - oblong with hair. Here in Karkonosze the plant blooms in May and June: if lucky – we can spot that on the slopes of Śnieżka, in Śnieżne Kotły and Śląski Dom. What is particularly interesting – the plant may blossom twice per year; second time in Autumn to increase the chance of survival in adverse mountain conditions.

Pleurospermum austriacum L.
Due to its large size (up to 2 m) and the thick ribbed stem – it significantly differs from the other, typically small, mountainous plants. It ives in the mountains of Europe and Asia, in Poland mainly in the Carpathians. In the Karkonosze Mountais it grows only in one place - in the Little Snow Boiler. 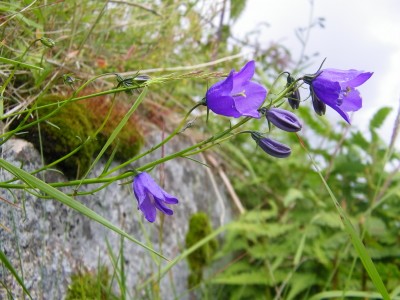 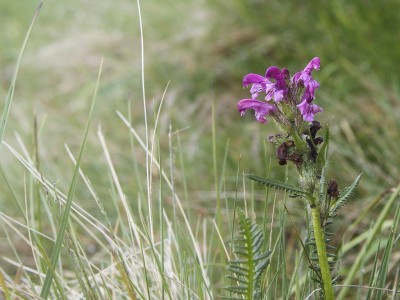 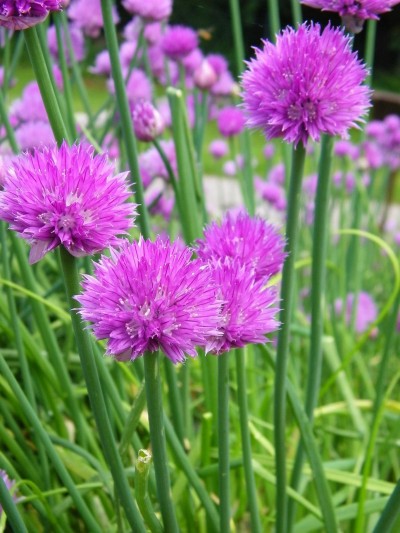 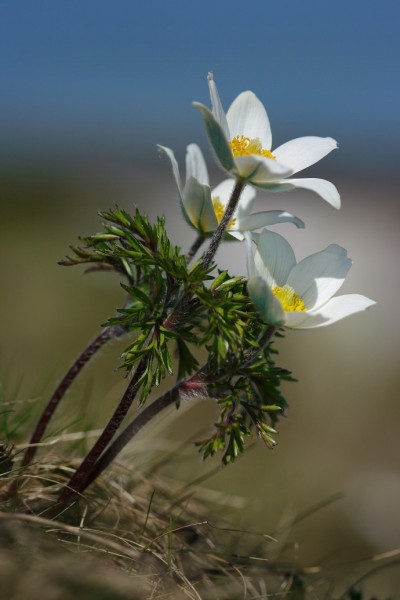 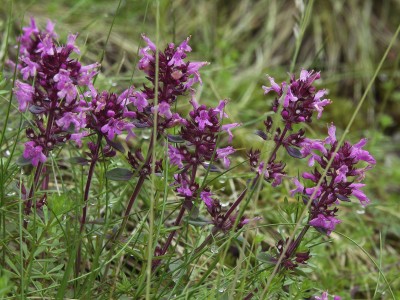 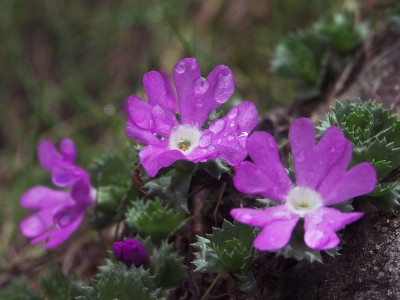 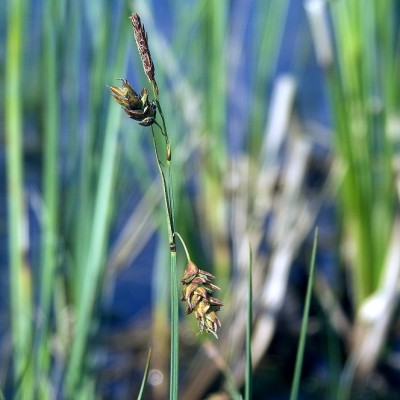 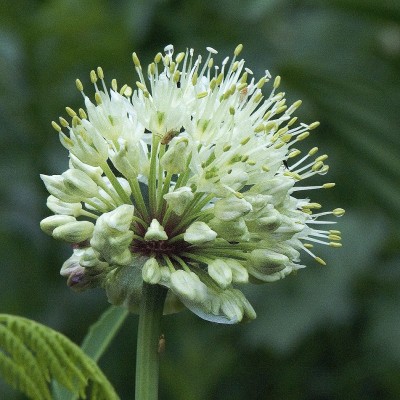