A bit of geography

The Giant Mountains (Karkonosze) are the highest and the largest range of the Sudety Mountains extending across the Czech-Polish trans border region: from Lubawska Gate in the east (Lubawska Pass, 511 metres above sea level) to Jakuszyce in the west (Szklarska Pass, 886 metres above the sea level). The highest peak of the Giant Mountains - Śnieżka (1603 AMSL) - is also the highest peak of the Sudety Mountains cordillera. Giant Mountains remain also the highest mountain range in the whole European highland, stretching as far as to: France, Belgium, Germany, the Czech Republic and Poland up to the Carpathians. Therefore along with the Jizera Mountains, Giant Mountains act as the first (orographic) natural barrier to the moist Atlantic air masses coming from the western direction. This very feature largely shapes the climate of these mountains. The average annual air temperature here varies from 8 ° C in Jelenia Góra to 0.7 ° C at the top of Śnieżka. The average precipitation level starts from 700 mm in the foothills and can elevate up to 1400-1500 mm on their hogbacks. These features have made all the altitudinal zonation floors (along with climate and the plant variations) typical rather to the high mountains one, despite the relatively small height of Giant Mountains.
The vertical extent of altitudinal zonation however, is lower by nearly 400 m compared to the nearest European mountains of the similar climate (meaning having developed subalpine and alpine zonation floors). These are: the Carpathians along with the Alps (400 km), followed by the Balkans (1 500 km) and the Scandinavian Mountains (2 000 km).

Unique geographical location as well as exceptional landform along with a shape of the mountain range, specific cool and moist climatic conditions, not mentioning the isolation of the place, resulted in curious natural phenomena. Giant Mountains occur to be (and have been) a home to the so-called post glacial relics - plant and animal species typical to the glacial period, that have survived until present times. There are endemic species living here as well – organisms that do not occur anywhere else outside of Karkonosze. (The list endemics includes as many as 30 species, such as Campanula bohemica, which can be found in the logo of the Giant Mountains National Park).

As far as the Polish side of Giant Mountains Range is concerned, one can distinguish Karkonoski Padół Śródgórski (a depression stretching from Szklarska Poręba, through Jagniątków, unto Przesieka - Borowice) and the Giant Mountains foothills composed of a series of ridges and individual hills, split up by deep valleys of three rivers; Wrzosówka, Kamienna and Podgórna. 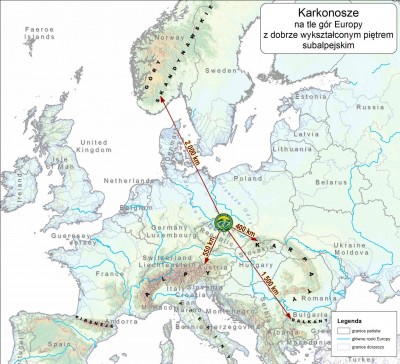 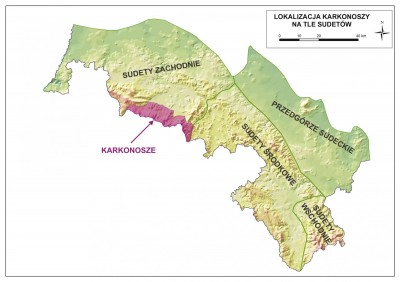 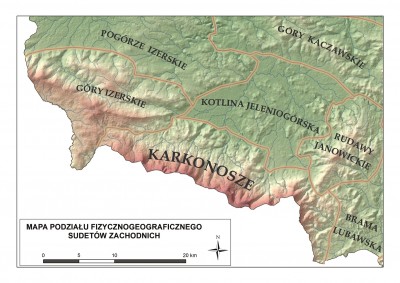